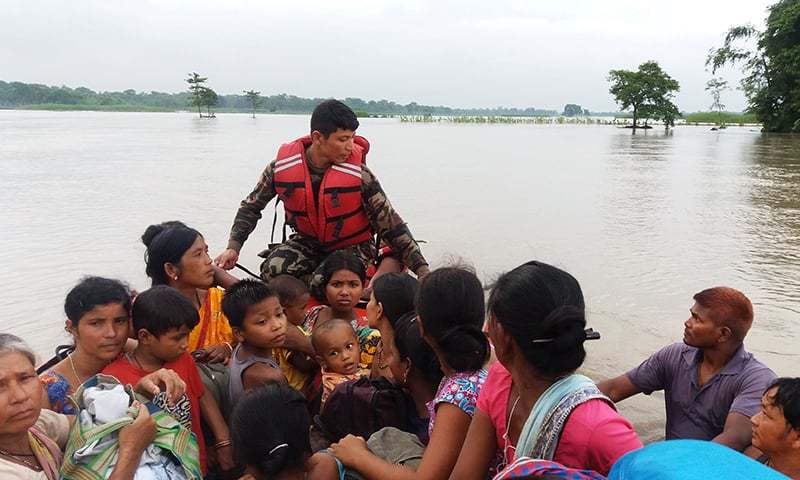 KATHMANDU: Floods and landslides in Nepal and India have killed more than 90 people in recent days, with at least two million residents forced to flee their homes, officials said Thursday.

Nepal has been worst hit, with homes and bridges destroyed after days of torrential monsoon rains, although water levels were now slowing receding.

â€œSince Monday, 73 people have been killed in the floods and landslides,â€ home ministry deputy spokesman Jhanka Nath Dhakal told AFP, increasing the death toll from Tuesday after the discovery of 15 more bodies.

â€œOur teams are working continuously in affected areas to search and rescue. We are also providing relief to the victims.â€ Images released by the army, which is involved in the operations, showed villagers waiting on rooftops to be evacuated in motorboats.

The worst-hit district was Pyuthan, 250 kilometres (150 miles) west of Kathmandu, where dozens of houses have been swept away.

Scores of people die every year from flooding and landslides during the monsoon rains in Nepal and neighbouring India.

The situation is particularly desperate this year because millions of Nepalis are still living in tents or makeshift huts after a devastating earthquake that killed nearly 9,000 people in 2015.

Floods have also hit India’s remote, northeastern state of Assam where 19 people have lost their lives mainly after rivers burst their banks in the last week, officials there said.

Thousands of those were sheltering in makeshift camps set up along highways and on higher ground, officials said.

â€œWe are providing food, medicines and other relief materials to the flood affected victims,â€ Sonowal said.

Concerns were mounting for the safety of rare one-horned rhinos and other animals trying to flee Assam’s famed Kaziranga National Park, which was also flooded.

â€œAt least a dozen animals have drowned or been killed after being hit by cars while crossing the national highway to move towards the adjoining Karbi Anglong Hills,â€ Assam forest minister Pramila Rani Brahma told AFP.

â€œThe park is completely submerged and all the animals are migrating in large herds to the hills,â€ the minister said.

Kaziranga is home to two thirds of the world’s one-horned rhino population.