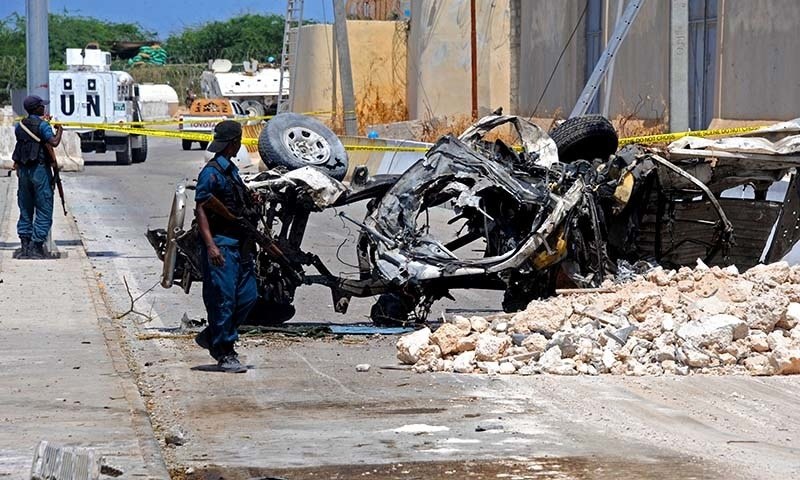 MOGADISHU: At least 13 people were killed on Tuesday in twin bombings near UN and African Union buildings adjoining Mogadishuâ€™s airport, police said, in what the jihadist Al Shabaab group claimed as a suicide attack.

The Al Qaeda aligned Al Shabaab group is blamed for a string of bloody assaults in Somalia and neighbouring Kenya, and is fighting to overthrow Mogadishuâ€™s internationally-backed government.

â€œAt least 13 people were confirmed to have died in two explosions, one of the vehicles went off near a security checkpoint and another close to a UN compound,â€ said Bishaar Abdi Gedi, a police official.

â€œThe security forces have managed to intercept the attackers and foiled the attacks,â€ Gedi said.

â€œThe two explosions were carried out by two brave Mujahedeen suicide bombers and they have targeted two different locations where the so-called AMISOM peacekeepers are stationed,â€ Al Shabaab said, referring to the African Union mission to Somalia.The cityâ€™s airport is heavily fortified and adjoins the capitalâ€™s main base for AMISOM, the 22,000-strong force backing the government in the battle against Al Shabaab insurgents.

AMISOM troops were deployed to Somalia in 2007 to defend the government against attacks by the Al Shabaab.

â€œAround 9am there was an explosion outside one of our gates, about 200 metres away,â€ mission spokesman Joe Kibet said.

â€œIt looks like an attack, they intended to attack. Now the situation is calm and our personnel is working on it,â€ he added.