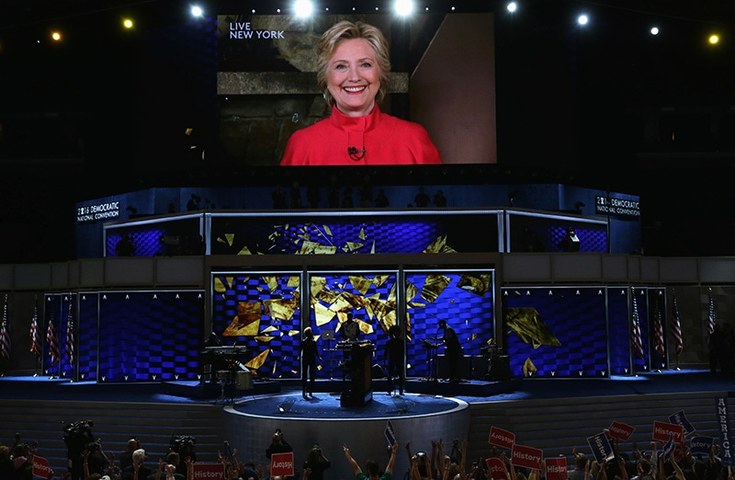 PHILADELPHIA: Hillary Clinton became the first woman in history to win the White House nomination of a major US political party Tuesday, securing the backing of Democrats at a convention in Philadelphia.

After a tumultuous convention opening which saw Sanders and Clinton supporters trade jeers and chants, cheers erupted as Clinton passed the 2,382-delegate threshold needed for the nomination, setting up a showdown with Republican Donald Trump in November.

Although the outcome was virtually a foregone conclusion, the state-by-state vote saw rowdy displays on the convention floor.

A handful of diehard Sanders delegates expressed frustration with their candidate’s defeat, but they were drowned out by ecstatic Clinton supporters.

After his delegates had been counted, Sanders took the floor and, in a bid to unify the party, called for a vote by acclamation.

â€œI move that Hillary Clinton be selected as the nominee of the Democratic Party for president of the United States,â€ he said to deafening cheers and finally a chorus of â€œayes.â€ Delegates thrust placards in the air, forming a mosaic of â€œH’sâ€ that coated the stadium floor.

â€œIt’s historic, I haven’t taken it all in yet,â€ an emotional Senator Tammy Baldwin told AFP.

Clinton’s nomination was formally put forward by Senator Barbara Mikulski of Maryland, the longest serving woman in the history of the US Congress. Civil rights icon John Lewis, a congressman from Georgia, seconded the nomination.