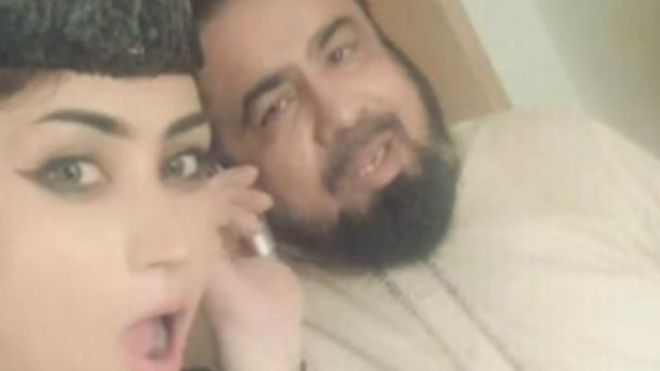 A prominent Muslim cleric is being investigated in connection with the murder of Pakistani social media celebrity Qandeel Baloch, police say.

He was suspended from two important councils as a result.

Ms Baloch, 26, was strangled by her brother Waseem early on Saturday in their hometown of Multan.

He admitted the apparent “honour killing”, saying it was justified.

The cleric has denied any role in the murder but says he will appear for questioning if summoned by police.

Following the murder he said Ms Baloch’s fate should serve as a lesson for others who want to mock religious figures.

He also said that he had “forgiven” her.

Police in Multan say they are also investigating Ms Baloch’s other brother, Aslam, a junior army officer whom her father accused of encouraging Waseem to murder her. 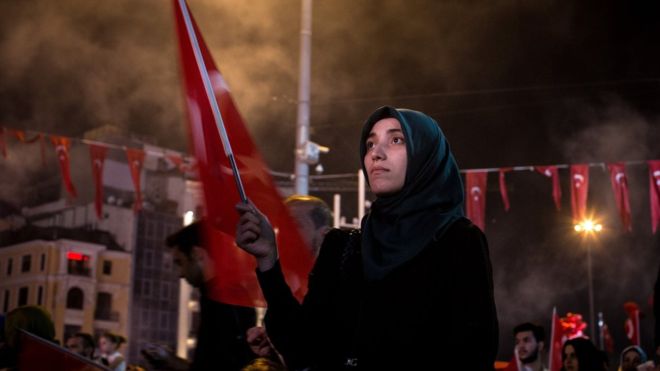 At least 45,000 people have been rounded up, sacked or suspended from their jobs by Turkey’s government in the wake of last week’s failed coup.

The purge of those deemed less than loyal to President Recep Tayyip Erdogan widened on Tuesday to include teachers, university deans and the media.

The government says they are allied to US-based cleric Fethullah Gulen, who denies claims he directed the uprising.

“We will dig them up by their roots,” he told parliament.

Turkey is pressing the US to extradite Mr Gulen and the issue was raised during a phone call between US President Barack Obama and President Erdogan on Tuesday, the White House said.

Spokesman Josh Earnest said a decision on whether or not to extradite would be made under a treaty between the two countries.

A Turkish government spokesman suggested that the US should be able to extradite the cleric “on grounds of suspicion” rather than requiring facts of the case against him.

“There is very strong suspicion for his [Gulen’s] involvement in this coup attempt. So this is sufficient grounds,” said spokesman Ibrahim Kalin.

For his part, Mr Gulen says claims he was behind the coup attempt are “ridiculous”.

“I urge the US government to reject any effort to abuse the extradition process to carry out political vendettas,” he said in a statement.

The Pentagon said that talks also took place on Tuesday between Defence Secretary Ash Carter and his Turkish counterpart regarding the Incirlik air base in southern Turkey.

The base, which is used by a US-led coalition fighting so-called Islamic State in Syria and Iraq, has been without power since the coup attempt.

Meanwhile, the Turkish government crackdown widened on Tuesday to include the education sector and government departments.

The news came on top of the arrests of more than 6,000 military personal and the sackings of nearly 9,000 police officers. About 3,000 judges have also been suspended.

The removal of thousands of officials has alarmed international observers, with the UN urging Turkey to uphold the rule of law and defend human rights.

A senior German official said on Tuesday that “a deep split” had opened in Turkey, and he feared the divisions would cause unrest among Germany’s large Turkish community.

“The danger of an escalation in violence between Erdogan supporters and opponents has also risen in Germany,” Bavarian Interior Minister Joachim Herrmann told the Berliner Zeitung newspaper.

The President of the European Parliament, Martin Schulz, has accused Turkey of carrying out “revenge” against its opponents and critics.

He also said a debate around restoring the death penalty was “deeply worrying”. The EU has warned such a move would end talks over Turkey joining the bloc.

Faisalabad Board Matric Result for the year of 2016 has been announced. and the names of Position holders are as follows