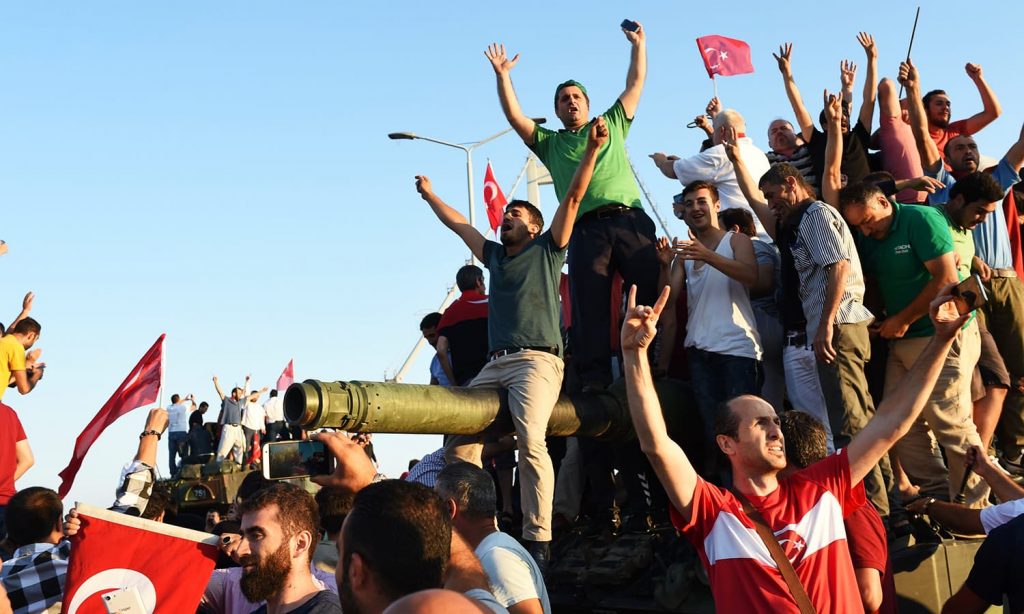 ANKARA: An attempted Turkish military coup appeared to crumble in the early hours of Saturday after crowds answered President Tayyip Erdogan’s call to take to the streets to support him.

Around 50 soldiers involved the coup surrendered on one of the bridges across the Bosphorus in Istanbul on Saturday, abandoning their tanks with their hands raised in the air, live footage on CNN Turk showed.

State-run Anadolu Agency reported 754 members of armed forces have been detained across Turkey.

A senior Turkish official said 60 people had been killed in the violence across the country, most of them civilians.

Meanwhile, Turkish army F-16s launched air strikes on Saturday against tanks stationed by coup backers outside the presidential palace in Ankara, an official with the presidency said.

â€œTurkish F-16s have launched air strikes against tanks outside the presidential palace,â€ the official said, adding that a military helicopter, which was involved in an attack against a Turkish satellite operator earlier, has been downed in the Golbasi district of Ankara.

Erdogan, who had been holidaying on the coast when the coup was launched, flew into Istanbul before dawn on Saturday and was shown on TV appearing among a crowd of supporters outside the airport, which the coup plotters had failed to secure.

The uprising was an â€œact of treasonâ€, and those responsible would pay a heavy price, he later told reporters at a hastily arranged news conference. Arrests of officers were under way, and it would go higher up the ranks, culminating in the cleansing of the military.

Erdogan put the blame of uprising on supporters of his arch-foe, US-based Turkish cleric Fethullah Gulen, who once was an ally of the Turkish president.

â€œWhat is being perpetrated is a treason and a rebellion. They will pay a heavy price for this act of treason,â€ Erdogan said at Istanbul’s airport.

The president said his hotel in the Aegean coast resort of Marmaris was bombed after he left. But he remained defiant, vowing: â€œWe will not leave our country to occupiers.â€

How the coup unfolded

Gunfire and explosions had rocked both the main city Istanbul and capital Ankara in a chaotic night after soldiers took up positions in both cities and ordered state television to read out a statement declaring they had taken power.

But by early Saturday, Reuters journalists saw around 30 pro-coup soldiers surrender their weapons after being surrounded by armed police in Istanbul’s central Taksim square.

They were taken away in police vans as a fighter jet repeatedly screeched overhead at low altitude, causing a boom that shook surrounding buildings and shattered windows.

The coup began with warplanes and helicopters roaring over Ankara and troops moving in to seal off the bridges over the Bosphorus that link Europe and Asia in Istanbul.

Reuters reporters saw a helicopter open fire in Ankara. Anadolu said military helicopters had fired on the headquarters of the intelligence agency.

In the first hours of the coup attempt, airports were shut and access to internet social media sites was cut off.

Soldiers took control of TRT state television, which announced a countrywide curfew and martial law. An announcer read a statement on the orders of the military that accused the government of eroding the democratic and secular rule of law. The country would be run by a â€œpeace councilâ€ that would ensure the safety of the population, the statement said.

Shortly afterwards, TRT went off the air. It resumed broadcasting in the early hours of Saturday.

Before returning to Istanbul, Erdogan appeared in a video call to the studio of the Turkish sister channel of CNN, where an announcer held up a mobile phone to the camera to show him. He called on Turks to take to the streets to defend his government and said the coup plotters would pay a heavy price

“There is no power higher than the power of the people,” Erdogan said.

“Let them do what they will at public squares and airports.”

Later television images showed scores of people, some waving Turkish flags, gathered in major squares in main city Istanbul and capital Ankara to show support for the elected government. Gunfire broke out in both cities.

The state-run Anadolu agency meanwhile said 17 police officers had been killed in an attack on their offices in the city.

Turkey’s armed forces do not condone the coup against the government, the commander of the special forces said.

General Zekai Aksakalli made the comment to broadcaster NTV, adding that the attempted coup would not succeed and that his special forces were in the service of the people.

State-run news agency Anadolu said military helicopters had fired on the headquarters of the intelligence agency. Subsequently, a Turkish F-16 fighter jet shot down a military helicopter being used by a faction within the army attempting a coup over the capital Ankara early on Saturday, broadcaster NTV said.

Earlier, Turkeyâ€™s prime minister Binali Yildirim had said a group within Turkeyâ€™s military engaged in what appeared to be an attempted coup.

Yildirim told NTV television on Friday: â€œIt is correct that there was an attempt.â€

Yildirim didnâ€™t provide details, but said Turkey would never allow any â€œinitiative that would interrupt democracyâ€.

The Turkish military said that it had assumed power over Turkey. â€œThe power in the country has been seized in its entirety,â€ said a military statement read on NTV television, without giving further details.