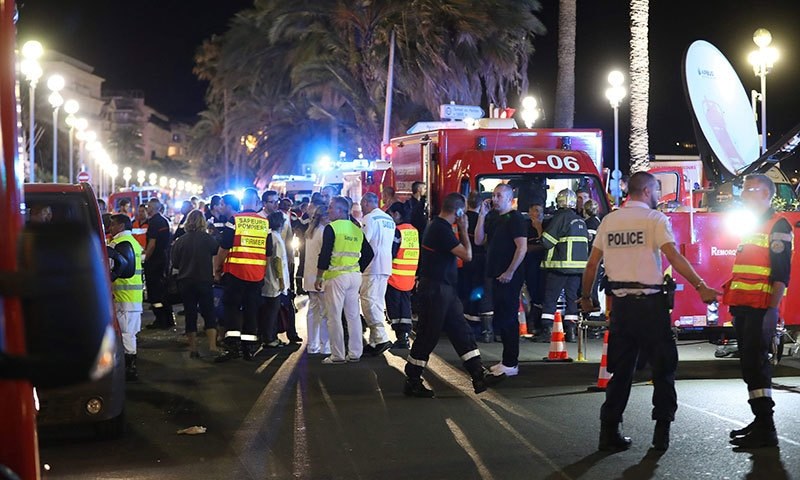 At least 80 people were killed, including children, when a truck drove into a crowd watching fireworks display in Nice for Bastille Day, says France’s interior minister.

French Interior Minister Bernard Cazeneuve says 80 people have died in the truck attack on the seaside avenue of Nice, and 18 people are in critical condition.

Numerous others have been wounded, he said after traveling to the scene.

“The identification of the criminal is in progress,” he said, refusing to confirm reports that an ID card was found after police shot the truck driver dead.

“We are in a war with terrorists who want to strike us at any price and in a very violent way,” the minister said.

President Francois Hollande says he will call a defence council meeting Friday that brings together defence, interior, and other key ministers, before heading to Nice.

Besides ensuring the continuation of the state of emergency and the Sentinel operation that puts 10,000 soldiers on patrol, he said he was calling up a reserve to help police, particularly at French borders.

Guns and other weapons were found in the truck. â€œThere were guns in this vehicle and larger weapons, but I can’t say more than that because that is the prosecutor’s job,” said Christian Estrosi, president of the Provence-Alpes-Cote d’Azur region where Nice is located.

The government said the driver of the truck was shot dead after barreling down the palm-lined Promenade des Anglais, sending hundreds fleeing in terror and leaving the area strewn with bodies.

â€œAn individual drove a truck into the crowd. He was killed by police,â€ said interior ministry spokesman Pierre-Henry Brandet.

Authorities said they found identity papers belonging to a 31-year-old French-Tunisian citizen in the truck.

A photograph showed the front of the truck riddled with bullet holes and badly damaged, with burst tyres.

While the incident has not been claimed by any group, prosecutors said the probe would be handled by anti-terrorist investigators.

Earlier a lawmaker for the Alpes-Maritime region, Eric Ciotti, said at least 75 people had been killed and another 15 were in a â€œcriticalâ€ condition. Scores of people were injured in the â€œattackâ€.

Hours after the attack, dozens of bodies lay on the ground covered in white sheets.

France has repeatedly been singled out as a prime target of the group and has been under a state of emergency ever since, boosting security across the country.

The apparent assault came just hours after France announced that a state of emergency declared after last November’s attacks would come to an end later this month.

The incident comes after a day of revelry as France celebrated its national day, Bastille Day, which began with military pomp and ceremony as its armed forces, tanks, and fighter jets swooped down the Champs-Elysees avenue.

The holiday typically ends with spectacular fireworks over the Eiffel Tower in Paris, as well as cities around the country.

However, celebrations were quickly overshadowed.

Images on television showed the Promenade Des Anglais sealed off, crawling with police and ambulances and authorities from the local Alpes-Maritimes prefecture urged residents to stay indoors.

â€œThe driver of a van appears to have killed dozens. Stay in your homes for now. More info to follow,â€ said Nice Mayor Christian Estrosi.

A large section of the city, extremely popular with sun-seeking tourists, was cordoned off.

French President Francois Hollande rushed back from the southern city of Avignon for crisis talks, his office said. The office further said that he would preside over a meeting of the country’s defence and security chiefs on Friday.

US President Barack Obama condemned â€œwhat appears to be a horrific terrorist attackâ€, although no group had claimed responsibility for the incident.

The incident comes as France was breathing a sigh of relief after successfully hosting the month-long Euro 2016 football championship, which passed off without incident.

No hostage-taking after France truck ‘attack’

The French government denied there was a hostage-taking incident after a truck ploughed into a crowd.

â€œInvestigations are currently under way to establish if the individual acted alone or if he had accomplices who might have fled,â€ Brandet said.

Anti-terrorism investigators have taken over the probe, prosecutors said.

An AFP reporter had to shield his face from the flying debris as he watched a truck plough at full-speed into a crowd celebrating Bastille Day in Nice.

â€œIt was absolute chaos,â€ said the AFP correspondent, who was among the crowd gathered to watch the fireworks for France’s national day on the beachfront Promenade des Anglais.

â€œI had to protect my face from flying debris.â€

The correspondent described the moment that the large white truck plunged into crowds of people who had come to the bustling Mediterranean beachfront to celebrate.

Terrified people screamed and scattered as it veered down the promenade, where adults and children were walking towards the famous Negresco Hotel.

â€œFor a big truck like that to get actually onto the promenade and then to go in a fairly straight line along there, looked to me like a very deliberate act,â€ the reporter said.

â€œIt was about 100 metres from me and I had a few seconds to get out of the way.â€ Other witnesses described hearing gunfire, although this was not immediately confirmed by the authorities.

Police could be seen surrounding the truck in the early hours of Friday, its windscreen riddled with bullet holes, under the lights of the Negresco Hotel.

Australian Emily Watkins said she was less than 50 metres away from the incident and saw the truck on the promenade but did not realise what was happening.

â€œThere was a lot of confusion. I don’t actually remember seeing the truck moving,â€ she told the Australian Broadcasting Corporation.

â€œThere was a lot of screams coming from ahead of us where the truck was, and people just running towards us and without really knowing what was going on we turned and ran as well.”

As we were running away we could hear what I thought at the time were more flares or fireworks.

â€œPeople were tripping over and trying to get into hotel lobbies and restaurants or car parks or anywhere they could to get away from the street.â€

Earlier in the evening, as the crowds enjoyed the fireworks, lightning had flashed in the skies above the Riviera resort