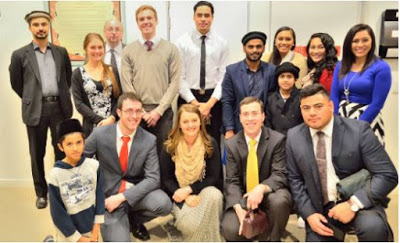 Members of the Ahmadiyya Muslim community held a interfaith harmony dinner on July 3 at the Baitul Masroor Mosque in Stockleigh.

The harmony event brought members of the Ahmadiyya community together with over 20 members of the Mormon community, as well as Len Limpus who was in attendance on behalf Loganâ€™s Bahai community.

The idea for the interfaith Iftari dinner was conceived months earlier by Michael Wroe, manager the the public affairs of Loganâ€™s Mormon community from the Church of Jesus Christ of Latter Day Saints, with the aim of bringing the two communities closer together to increase brotherhood and gain a better understanding of each otherâ€™s chosen faith.

The evening began with a meal shared by all three faith groups which was followed by and question and answer session on the topic of â€˜fasting in my religionâ€™. Â The audience were given the opportunity during the session to query a number of panelists from each faith about their beliefs.

More than 120 people attended throughout the interfaith harmony program which also included prayer sessions and ceremonies, including locals of Stockleigh and Jimboomba as well as 23 visitors.

Plans for another interfaith harmony event are already in progress.