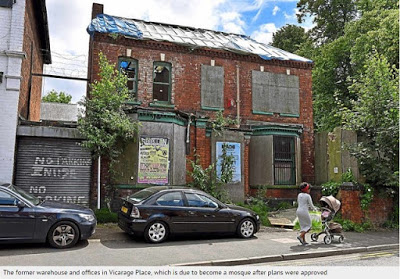 A mosque will open on the outskirts of Walsall town centre after councillors gave approval to the controversial proposals.

Plans to convert an old warehouse and offices in Vicarage Place, Caldmore, into a place of worship were approved at a Walsall Council planning meeting. It came despite dozens of people lodging objections and the authority receiving two petitions.

Planning officers had recommended the committee should approve the proposals, but concerns were also voiced during Thursdayâ€™s meeting â€“ before a majority of councillors voted in favour of the plans.

The planning application was lodged by the Ahmadiyya Muslim Association UK, but fears mounted that it would damage community cohesion.

Chairman of the Union of Muslim Organisations, Matloob Hussain, encouraged councillors to reject the plans.

He told the meeting: â€œI ask the Ahmadi representative to stop calling their place of worship a mosque and I urge this committee to refuse this application on the basis that it will lead to community tensions and can incite criminal acts. We want to live in peace and harmony with everyone in Walsall.â€

A government planning inspector ruled the site suitable for a place of worship, following a previous application at the same site.

But former council leader Mike Bird said: â€œI do believe that there have been too many changes since the last application looked at by the inspector. I believed it then and I believe it now, that the limited parking thatâ€™s available at this establishment is not enough.â€

An initial motion to refuse the application due to the impact on community cohesion, lack of parking, the impact on residents and fear of crime, was made by Councillor Aftab Nawaz. He said: â€œItâ€™s obvious to me that there is not enough space there.

Despite attempts to see the plans thrown out, councillors voted in majority to approve the application.

The application had seen dozens of people lodge objections with the council and two petitions, signed by more than 50 people, were handed in.

Mr Hussain said: â€œAhmadis exist in many Muslim countries and are free to practise their faith but are not permitted to name their place of worship as mosques. We live in peace in Walsall and if this committee allows tonightâ€™s application to be approved it will cause divisions in our society and may lead to future trouble if this place of worship is ever built.â€

While raising no objections, comments from West Midlands Police included in the report stated: â€œThere is an awareness that there may be increased community tension from the local community and other organisations opposed to this type of development. This is the highest crime area in Walsall so security measures are recommended.â€

Other concerns included a lack of parking, with the proposal only including six parking spaces, including two disabled bays.

The Ahmadiyya Muslim Association UK said it expected between 10 and 30 worshippers to attend the mosque on average per day, rising to between 50 and 60 on Fridays.