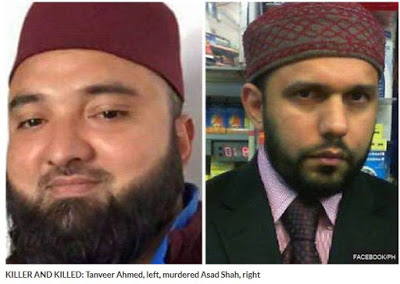 A Bradford cab driver has admitted murdering a popular Glasgow shopkeeper in a religiously motivated attack.

At a hearing at the High Court in Glasgow today (Thursday), Ahmed pleaded guilty to the murder of 40-year-old Shah.

The attack happened just hours after Shah posted an Easter message to his customers on Facebook which read: â€œGood Friday and a very happy Easter, especially to my beloved Christian nation.â€

Shah was an Ahmadiyya, a group well known for peaceful, interfaith concerns and had uploaded numerous videos about his spiritual beliefs to his YouTube channel, most of which were filmed inside his shop.

Ahmed, who was arrested shortly after the attack, said that Shah had â€œdisrespectedâ€ Islam and in a statement released by his lawyers said Shah had falsely claimed to be a prophet.

â€œAsad Shah disrespected the messenger of Islam the Prophet Muhammad peace be upon him. Mr Shah claimed to be a Prophet,â€ said Ahmed.

â€œIf I had not done this others would and there would have been more killing and violence in the world.â€

In court, Judge Lady Rae told Ahmed: â€œThis was a truly despicable crime, motivated, it seems, by your sense of offence at a manâ€™s expression of his religious beliefs, which differ from yours.

â€œLet me be clear – thereâ€™s no justification whatsoever for what you did.â€

Sentencing was deferred until August 9 and Ahmed was remanded in custody.

Following the attack in March, an online fundraising page was set up to support the shopkeeperâ€™s family and raised over Â£100k in just four days.

The GoFundMe page was set up by four local residents and customers of Shah who wrote, â€œMr Shah was a popular, well respected and much loved member of our community and his death has devastated many.

â€œHe was a warm and friendly man and he always went out of his way to make time to talk to you, he was more than just our local shopkeeper. He was a friend to many.â€

Another regular customer, Linda Carlisle, posted: â€œI live across the road from Mr Shahâ€™s shop and was very saddened to learn of the brutal attack on such a humble, kind, peaceful and loving man.

â€œWhen I couldnâ€™t open my car door he searched his shop to find the correct battery for my car key. This was the measure of the man. A generous, gentle man who took an interest in and went out of his way for others. RIP Mr Shah.â€

NFRN Scottish President, David Forbes said at the time he was â€œshocked and saddened by the death of fellow member Asad Shah.â€

Chief executive Paul Baxter, added: â€œMy thoughts and prayers are with Asadâ€™s family and those who knew him as a fantastic friend.â€