The tragic and brutal murder of Mrs Jo Cox MP in June 2016 was followed by an international outpouring of grief. Â

Members of Majlis Ansarullah in Batley and Spen Valley (The Constituency which Mrs Cox represented) met and paid their respects to the family of Jo Cox as well as attending a number of tribute events following her death.

Before becoming an MP Mrs Cox worked for Oxfam, NSPCC and Save The Children. Â She supported a large number of charities and tried to help everyone in need whether it was refugees in Syria or the poor and disadvantaged in Batley.

In consultation with representatives of the Charity Walk For Peace it was felt that the best way to pay tribute to Mrs Cox and to honour her legacy was to make a donation to one of the local charities that she supported. 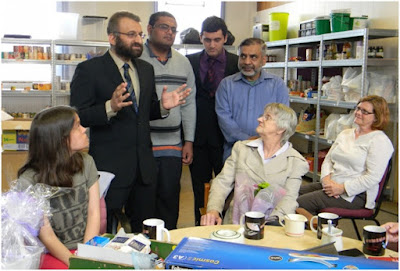 The charity that was chosen is Batley Foodbank. Â The objective of Batley Foodbank is to alleviate the effects of food poverty in Batley and the surrounding areas. Batley is a former mill town in West Yorkshire and is close to the cities of Bradford and Leeds.

The Foodbank was started approximately three years ago and demand for the service has continually increased. Â All users of the Foodbank are in poverty and are referred by local social services. Â The Foodbank is entirely staffed by volunteers and faces a constant struggle to maintain stocks of food due to the high demand.

The Project Leaders of Batley Foodbank, Mrs Sandra Major and Mr Ken Lowe, were contacted by Mr Arif Ahmad, Coordinator for Charity Walk Cheque Presentations for the North. Â They were both delighted and overwhelmed to accept the donation. Â Both were close friends of Jo Cox and Mrs Major was with Mrs Cox when she was murdered.

The presentation of the donation took place on the last day of Ramadan â€“ Wednesday 6 July at 1pm at Batley Foodbank.

A short address was given by Mr Arif Ahmad about the charitable activities of the Charity Walk For Peace and Majlis Ansarullah and the Ahmadiyya Muslim Jamaâ€™at. Â In addition the purpose behind the donation â€“ that is to support small, local charities which were supported by Jo Cox â€“ was also explained.

Local Majlis Ansarullah members met and presented the Project Leaders and volunteers with the cheque for Â£1,500 and some gift packs, flowers and chocolates.