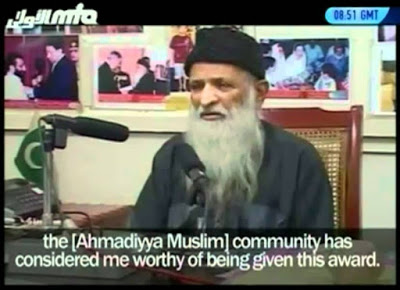 Chenab Nagar: Mr Saleemuddin, spokesman of Jamaat Ahmadiyya Pakistan expressed grief over the death of the renowned social worker, Mr Abdul Sattar Edhi, and said that his death is a great loss to Pakistan.

“He [MrÂ Abdul Sattar Edhi] had dedicated himself to the service of mankind. His social services will always be remembered. He further stated that the way Edhi had served the people, with no consideration of their faith, language or ethnicity, was a model for everyone. He started his services in a small dispensary; these later grew into the largest network of social service in Pakistan. The sapling he planted has grown into a massive tree of nationwide network of social service.

“In year 2010, Jamaat Ahmadiyya presented Mr Abdul Sattar Edhi the Peace award in recognition of his selfless services to humanity. In a subsequent interview, Mr Edhi thanked the Jamaat for the award and said that humanity was the greatest of religions. â€˜â€™I never ask people their religion; I deal with them as humans, first and last,â€ he said. The Ahmadiyya spokesman stated that the best way to pay homage to Mr Edhi was to treat all people as humans, with no prejudice to their caste, colour or creed, and serve them selflessly.”

The spokesman prayed for the departed soul and extended sympathy with his near and dear ones.