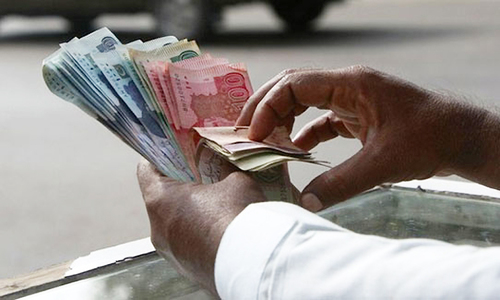 In the local currency market, the rupee last week showed a firm trend against the dollar but was seen under some pressure against the euro, after the dollar, in international trade, surged against the major currencies due to anxiety over the aftermath of Britainâ€™s decision to quit the European Union.

The sterling managed to recover partial losses against the rupee in the week after two days of a brutal selloff in sterling sparked by Britainâ€™s vote to leave the European Union in the previous week. The market is expected to remain dull due to a prolonged weekend ahead of Eid holidays next week.

Last week on the interbank market, the rupee turned positive against the dollar after snapping past a three week losing streak. In the fourth trading session, however, the dollar staged a rebound as the rupee posted nine-paisas loss, hitting the weekâ€™s lowest level at Rs104.82 and Rs104.84. The interbank operation was shortened by one session due to the Bank Holiday on July 1.

During the week, the rupee posted one-paisas gain against the dollar on the buying counter while the parity did not show any change on the selling counter on week on week basis.

In the open market, the week ended on a negative note as the rupee posted ten-paisas loss in the fifth trading session and was last seen changing hands against the dollar at Rs105.00 and Rs105.20, hitting almost a week low.

On week on week basis, the parity in the open market did not show any change last week. Against the rupee, the dollar lost ten-paisas in one session but managed to recover by the same amount in another session while trading flat in three sessions.

Against euro, the rupee rebounded sharply last week. Staging sharp recoveries, the rupee was seen trading at a four-month high as the euro came under pressure in overseas trade after Brexit clouded the future of the rest of the bloc.

However, a divergent trend was witnessed against the euro the second trading session onwards; the rupee fell versus the euro till the fourth straight session. It shed another ten-paisas in the last trading session before closing the week against euro at Rs115.90 and Rs116.90.

During the week in review, the euro thus gained Rs1.10 in four sessions and lost 90paisas in one session on the buying counter.

On the selling counter, it lost 75paisas in two sessions and gained 65paisas in three sessions.