Dhaka attack: ‘Those who could recite Quran were spared 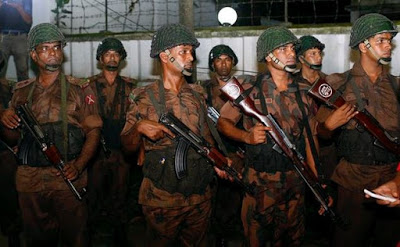 Those who could recite a verse from the Quran were spared, others were tortured, said a rescued hostage of the Gulshan restaurant attack where at least two lawmen were killed.

â€œThe others were tortured by the gunmen,â€ said Rezaul Karim, father of Hasnat Karim who was held hostage inside Holey Artisan Bakery in the diplomatic zone for over 10 hours.

Hasnat Karim, his wife Sharmin Karim and daughter Safa, 13, and Rayan, 8, went to celebrate Safaâ€™s birthday at the Spanish restaurant in Gulshanâ€™s Road no-79 last night.

The birthday celebration took a dangerously unprecedented turn when gunmen stormed into the restaurant and took about 20 people, including foreigners dining there, hostage.

They were finally rescued after a joint drive of the military, paramilitary Border Guard Bangladesh, police and elite force Rapid Action Battalion pushed a heavily-manned offensive this morning.
â€œThey (gunmen) did not behave rough with the Bangladesh nationals,â€ Reazul said quoting his victim son Hasnat. â€œRather they provided night meals for all Bangladeshis.â€

â€œThe gunmen were doing a background check on religion by asking everyone to recite from the Quran. Those who could recite a verse or two were spared. The others were tortured.â€

According to him, the gunmen were done with the foreign nationals dining in the eatery by 11:00pm last night. By the end, five gunmen sustained bullet injuries and â€œprobably diedâ€.

Meanwhile, the family was rushed to Detective Branch office for further interrogation, according to Hosne Ara, the mother. â€œWe have been assured that they will be sent home safely.â€