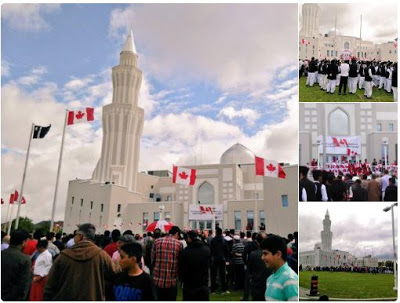 Friday was a â€œvery special dayâ€ for Rakan Almasri. Not only was he spendingCanada Day with his family, but it was his first Canada Day ever in his new home.

â€œNow Canada is our home. Itâ€™s in our heart.â€

Almasri, who arrived in Canada in November 2015, was one of about 200 Syrian refugees who were invited to attend a Canada Day celebration outside the Baitul Islam Mosque in Vaughan on Friday afternoon.

The event was organized by the local branch of international Islamic organization Ahmadiyya Muslim Jama, which has been assisting Syrian refugees with settling in and around Vaughan.

Hundreds of worshippers who had just finished Friday prayers at the mosque flooded out of the building to the tents sent up in front, braving stormy-looking skies and fierce winds to watch a flag raising, a singing of O Canada by a childrenâ€™s choir and listen to speeches from local politicians, including Vaughan Mayor Maurizio Bevilacqua and Ontarioâ€™s Minister of Transportation, Steven Del Duca, as well as Ahmadiyya Muslim Jama national leader Lal Khan Malik.

In his speech, Bevilacqua praised the local community and Ahmadiyya Muslim Jama for its leadership in helping bring Syrian refugees to Canada and getting them settled in their new home.
Syrian refugee from Homs, Eaman Almasri, was one of thousands who gathered at Baitul Islam Mosqueto to celebrate the last Friday of Ramadan and Canada Day. (Andrew Lahodynskyj/Toronto Star)

â€œYou do things without much fanfare. . . You just get it done. What you do is what is right and what is just,â€ Bevilacqua said. â€œYou are a community that is exceptional.â€

Bevilacqua also noted that this July 1 held even greater meaning than usual. Not only did the day mark Canadaâ€™s 149th birthday, but also 25 years since Vaughan was incorporated as a city and 50 years since Ahmadiyya Muslim Jama was established in Canada.

Dr. Aslam Daud, the chairman of humanitarian aid organization Humanity First that helped bring dozens of Syrian refugees to Canada last year, said the day was the perfect reward for all the work Humanity First has done.

â€œItâ€™s a win for us and a win that weâ€™ve been able to bring them to peace and safety, and now theyâ€™re going to be a part of Canadian culture and the Canadian fabric,â€ Daud said.

The day also held special meaning for the Muslim community in attendance. Fridays are considered the holiest day of the week for Muslims, and this was the last Friday in the holy month of Ramadan.

For the refugees, who were all given Canadian flags and Ahmadiyya Muslim Jama 50-year-anniversary pins after the ceremony, it offered time to reflect and celebrate how far theyâ€™ve come.
Nourhan Almasri is a refugee from Homs, Syria. She also joined in the celebrations at Baitul Islam Mosqueto on Friday. (Andrew Lahodynskyj/Toronto Star)

Suha Kalbouneh and her husband, Mutaz Alkazak, fled their home in Damascus in 2013, staying in Ghana for three years before finally arriving in Canada in February. Kalbouneh said she was â€œso happyâ€ to attend the Canada Day celebration, explaining that an event of its kind would be impossible to hold in Syria.

â€œCanada is very (free). You can do what you want and people all live together â€” Muslim, non-Muslim, Christian â€” they all laugh together, they are sitting together,â€ Kalbouneh said.

â€œYou see, Syria before the war, we were also like that, right? But after the war came it became so hard to live. Muslims killed each other. Every problem is now in Syria, but Alhamdulillah (praise be to God), here you can live without any problems.â€

Alkazak, who is now working as an Arabic teacher, agreed.

â€œI find people here in Canada are very nice, very good people. You can find everything. . . This is good country,â€ Alkazak said. â€œItâ€™s very, very nice day. We all love Canada and I love Canada.â€

For Eaman Almasri, Rakanâ€™s daughter, the celebration helped solidify her new future in Canada. She admitted that, at first, the weather and language barrier were hard to deal with, but after studying English for two semesters in high school and the arrival of summer, she is happy and excited for whatâ€™s to come.

â€œI feel a very good feeling, because Canada will be our new home. And as we loved home like Syria, we will be loving Canada also.â€