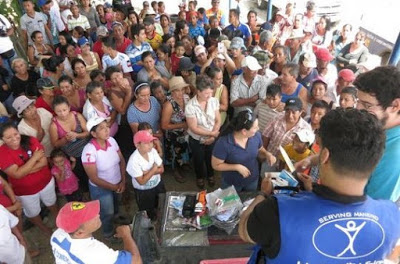 A KEIGHLEY-based Muslim group has helped to co-ordinate relief efforts to offer life-saving relief to districts in Ecuador stricken by a major earthquake.

Coastal regions of the country were devastated by a 7.8 magnitude earthquake in April, which left 600 dead and 7,000 injured.

Dr Aziz Hafiz, president of Keighley’s Ahmadiyya Muslim Community and director for disaster relief of the Humanity First organisation, said: â€œAlthough there hasn’t been much in the press about the quake, more than 80,000 people have been displaced and the need for shelter remains.

â€œWhile debriefing our team on their return, I was struck by the level of resilience shown by the local people despite the worst earthquake to hit Ecuador in more than a decade.”

Mr Hafiz was involved with work to co-ordinate the mission to help survivors in the aftermath of the disaster.

He has been dealing with the United Nations and the Government of Ecuador to dispatch Humanity First workers to the hardest-hit province of Manabi.

There they helped people with water purification equipment, allowing some 2,750 people to receive clean water and 1,250 people to get emergency food assistance.

A total of 300 water survival boxes, which contain essential items, including a water filter for a homeless family, were sent to the people in most need of assistance.

Mr Hafiz added: “There can be huge amounts of logistical and bureaucratic issues to deal with in a disaster, especially around the issue of arranging international cargo, flights and customs in the affected country.”