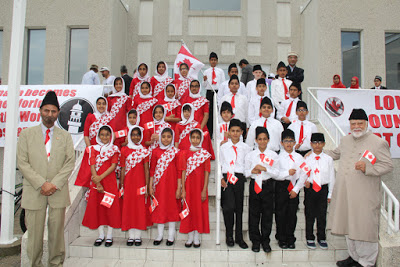 TORONTO â€“ Since arriving in Canada seven months ago, Abeer Al Hajj has learned a lot about her new country and how it differs from her native Syria.
…
Celebrating their adoptive country is both a major milestone and a source of uncertainty for many Syrian newcomers, said Safwan Choudhry, spokesman for the Ahmadiyya Muslim Jamaâ€™at, an organization that has helped several families settle in.

â€œI can tell a lot of them are anxious, they want to see what do Canadians do,â€ he said.

â€œAnd I understand where theyâ€™re coming from because typically, every country celebrates their national day very differently,â€ in many cases with a strong emphasis on military glory, he said.

â€œSo the majority are just curious to see whatâ€™s going to happenâ€¦and I got the sense that a lot of them just want to stand back and watch and soak in how we celebrate Canada Day.â€

Many Syrian families in the Toronto area are expected to attend the annual Canada Day celebration hosted by the Ahmadiyya Muslim Jamaâ€™at, a massive event that typically draws thousands and is set to take place outside a mosque in Vaughan after afternoon prayers.

Choudhry said the Friday sermon will centre on Canada Day and loyalty to oneâ€™s country.

The festivities will see a group of children sing the national anthem, Abeer among them. The girl said she has been practising on top of the daily singalong at school.

But a key part of the celebration â€” the barbecue â€” will be off-limits for Muslims fasting for Ramadan. The month-long ritual precludes participants from eating or drinking between sunrise and sunset and its timing is set by the lunar calendar.

The last Friday of Ramadan is particularly significant and turnout is expected to be even higher than usual since most people will have the day off because of the statutory holiday, Choudhry said.

Next year, Canada Day will not fall during Ramadan, he said.

â€œThe timing of it and the way that itâ€™s falling together, I think there is some significance, but I think particularly for Syrian refugees, I get the sense every time I talk to them, itâ€™s very emotional for them,â€ he said.

The knowledge that they can pay tribute to their new country while also maintaining their religious practices comes as great comfort to Abeerâ€™s family, her father Muhammad Al Hajj Abdullah, 40, said.

Living in Canada has also offered Abdullah, who is in a wheelchair, another type of freedom, he said.

After an explosion in the Syrian town of Aleppo left him paralyzed from the waist down, the father of three found himself unable to get around easily despite having a manual wheelchair, he said.

On his arrival here, the Ahmadiyya Muslim Jamaâ€™at gave him an electric wheelchair which, along with accessible transit, have allowed him to regain his independence, he said.

On a recent weekday evening, he played ping-pong with his youngest son, five-year-old Bashir, on a coffee table in the familyâ€™s living room in north Toronto, while Abeer did her homework and the oldest child, Abdul Karim, bounced a soccer ball.