USA: Breaking bread together in Boston, for understanding and peace 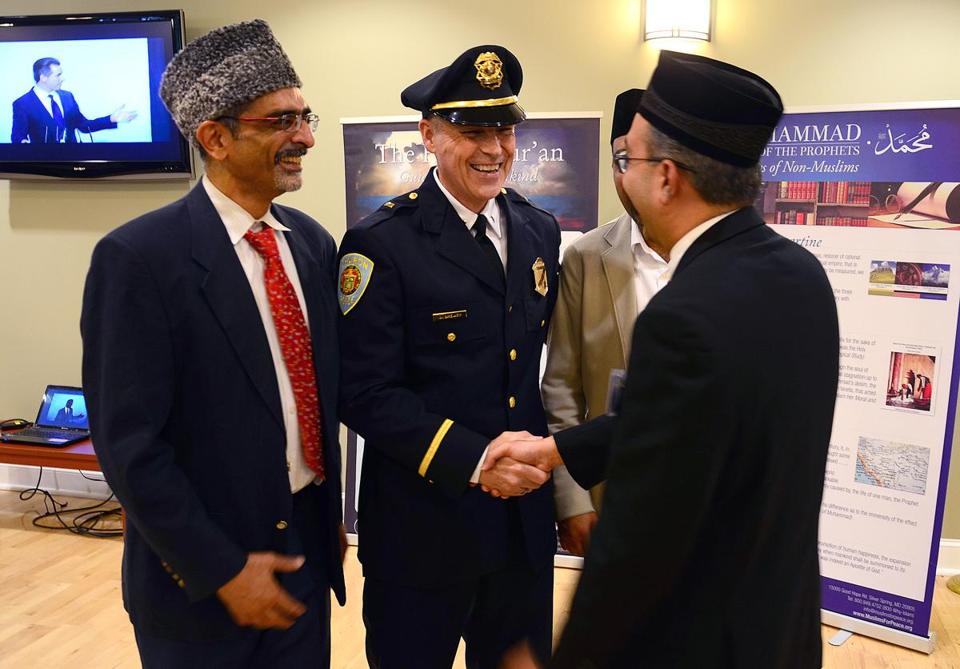 The Ahmadiyya Muslim Community of Boston hosted an Iftar dinner with a reception, guest speakers, and an introduction to Islam at the Sharon Community Center. From left to right, Dr. Amer Malik, Sharon police Lieutenant Donald Brewer, and Nasir Rana greet one another.

SHARON â€” Presidential candidate Donald Trump wants to ban foreign Muslims from entering the United States and build a wall on the Mexican border. But in this Boston suburb, a local Muslim group is trying to spread a message of peace and acceptance, spurred in part by its own minority status within the Muslim community.

The group recently hosted an evening meal to break the daily fast during the Muslim holy month of Ramadan. About 150 people — Muslims, Jews, Christians, agnostics, and others — broke bread together at the interfaith dinner, held at a municipal community center in Sharon.

At sunset, they ate dates, passed around the table on a communal plate. A buffet of foods strongly influenced by the cuisines of India and Pakistan followed.

During Ramadan, which this year ends around July 5, observant Muslims fast from dawn until sunset. In Islam, it is the holiest time of the year, marking the month when Muslims believe God began to reveal their holy book, the Quran, to the prophet Mohammed.

The holy month is a time of self-reflection, prayer, and charity, but it also brings families and friends together to celebrate with special meals after sundown.

At the June 11 Iftar dinner, the evening meal, in Sharon, guests and hosts chatted about the topics of the hour — religion, diversity, acceptance. Diversity was perhaps even more on the dinersâ€™ minds than at other interfaith events, because their hosts belong to a small Muslim sect unknown to many Americans: the Ahmadiyya Muslim Community.

â€œA lot of people, when they talk about Islam, people think theyâ€™re talking about one thing,â€ said guest Mohamad Ali, an engineer from Arlington. Ali, who is not Ahmadi and belongs to the Islamic Center of Boston, in Wayland, said even among Sunnis, the largest Muslim sect, there are â€œdozensâ€ of ways of practicing the faith.

The Ahmadiyya movement was founded in the late 19th century in the South Asian region of Punjab, which includes parts of present-day India and Pakistan. Ahmadis believe that God sent Mirza Ghulam Ahmad, a man born in India in 1835, as a prophet and messiah, although not a law-bearing prophet like Mohammed. The discord between this idea and the majority Muslim belief that Mohammed was the last prophet of God has led to ill treatment of Ahmadis in some parts of the world.

The largest number of Ahmadis live in Pakistan, yet that countryâ€™s constitution defines them as non-Muslims. They are targeted for persecution and violence.

Hamza Chaudhry, a freshman at Princeton who grew up in Westwood, said his immigrant parents cannot go back to Pakistan for fear of persecution. It is also very difficult for him to see his cousins who still live in Pakistan.

He said thatâ€™s why the communityâ€™s annual interfaith dinner is special to him.

Ahmadis first began moving to Massachusetts in the 1960s and met at one anotherâ€™s homes to worship, according to the Pluralism Project at Harvard University. The Boston chapter bought land in Sharon in the late 1970s, but it did not build its mosque until 1997.

Claiming 260 members in the Boston area and tens of millions worldwide, the group bills itself as â€œthe leading Islamic organization to categorically reject terrorism in any form.â€

It has embarked on a message campaign dubbed True Islam, for which the Boston chapter is planning a July 13 launch event at the State House.

On the back of the program for the interfaith dinner was a list of the campaignâ€™s 11 principles, including rejection of terrorism, equality of women, freedom of religion, separation of mosque and state, and loyalty to oneâ€™s country of residence.

The eveningâ€™s activities included a recitation from the Quran, a video introduction to the Ahmadiyya community, and several guest speakers.

Some explained the fast of Ramadan. Imam Hamid Malik, a regional missionary for the national Ahmadiyya organization, said the sharp pain in oneâ€™s stomach from fasting gives people a sense of gratitude for everything they have and inspires charitable works.

Other speakers, including state Representative Louis Kafka (Democrat of Stoughton) and the Rev. Beverly Boke of First Parish Unitarian Universalist in Canton, thanked the group for reaching out to the larger community.

Boke commended the hosts for trying to live up to ideals â€œshared by good people everywhere.â€

But even for the most open-minded at the dinner, the evening was an exercise in accepting differences. In keeping with the host groupâ€™s custom, Ahmadi women sat separately from the men. For this event, the womenâ€™s tables were at the back of the room, separated from the menâ€™s by a row of chairs. After the speaking program, when dinner began, a moving wall was drawn across the room to completely divide their space from the menâ€™s.

Asked how she felt about the arrangement, Ahmadiyya community member Shahida Saeed answered, â€œComfortable.â€ The women in the community grew up with the practice, she said.

Non-Ahmadi female guests, including other Muslim women, were welcome to sit where they pleased, and many sat up front, with the men.

A Globe photographer was asked not to photograph Ahmadi women from the front â€“ only from the side or back.

In the United States, Ahmadis and other Muslims have a delicate relationship. It is â€œfriendly, but not too much,â€ according to Saeed, a certified nursing assistant who lives in Brockton.

Like other Muslims, Ahmadis sometimes face harassment on the basis of being Muslim or immigrant — particularly if their clothing identifies them as such. Saeed said she once heard someone call out, â€œGo home!â€ while she was picking up her granddaughter from school.

A similar message, with an insult, was found written on the inside of an MBTA train on the Red Line June 16.

Earlier that day, during the morning commute on the Orange Line, transit police questioned two people after other riders reported they appeared to be Middle Eastern and acting suspiciously. But it appeared â€œthey might have been praying, because itâ€™s Ramadan,â€ Frank DePaola, general manager of the MBTA, said in an interview with Boston Herald Radio.

Anti-Muslim incidents at United States mosques have increased dramatically. Nearly 80 incidents of harassment, vandalism, and the like were recorded last year — about four times more than in 2014, according to the report by the Council on American-Islamic Relations and the Center for Race and Gender at the University of California Berkeley.

In remarks at the dinner, Kecia Ali, an associate professor of religion at Boston University, cited an incident two days earlier in Raeford, N.C., in which authorities say an Army Reserve officer brandished a handgun at a mosque and threatened to kill Muslims. Authorities say Russell Thomas Langford also left packages of bacon at the mosque, an act apparently meant as desecration, because the Quran forbids eating pork.

At the same time, the devastation of terrorism continues. In Orlando, just a few hours after the interfaith dinner concluded in Sharon, 29-year-old Omar Mateen pledged allegiance to the extremist group that calls itself Islamic State and committed the deadliest mass shooting by a single shooter in US history, killing 49 people and wounding many others at a predominantly gay nightclub.

In todayâ€™s world, Ali said, the relevant categories for discussion are not Muslim versus non-Muslim, but violence versus peace and understanding.

Breaking bread together in Boston, for understanding and peace