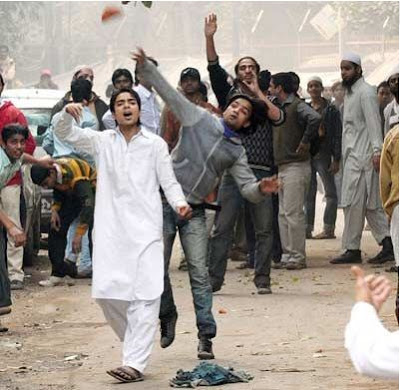 The situation remains edgy in Gonikoppal, a small town in the Kodagu district of the Indian state of Karnataka, where two Ahmadis were assaulted outside the Ahmadiyya community center in the early morning hours on Sunday, June 26thwhen about 20 known anti-Ahmadi extremists descended at Fajr (dawn) prayers time and attacked the victims as they were leaving after offering their prayers.

A team of elders from the nearby Madikeri chapter of the Ahmadiyya Jamaat came to Gonikoppal to assess the situation after learning about the attacks on the Ahmadiyya members reportedly triggeredÂ by jealousyÂ for the Ahmadiyya’s success in the promotion of â€˜peacefulâ€™ Islam.

According to the latest reports, a mob of about 150 gathered around the Gonikoppal police station to prevent theÂ filing of a criminal complaint against the assailants and complained that the attack took place only because Ahmadis were converting others to IslÄm-Ahmadiyya.

The reports further say the mob turned enraged seeing visiting Ahmadiyya elders from Madikeri and attacked them also. The police had to intervene and escorted the victims back to Madikeri.

The mob is now demanding the police to convince the victims for a compromise and not lodge an official criminal complaint against the attackers, it is learned.