Chile champions for the Copa America 2016 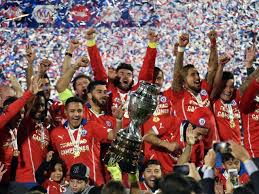 Messi blazed a penalty over the bar in the shoot-out before Lucas Biglia missed to leave Chile’s Francisco Silva with the task of stroking home the winning spot-kick at the MetLife Stadium.

It was a carbon copy of last year’s Copa America final, also won by Chile on penalties after a goalless draw.