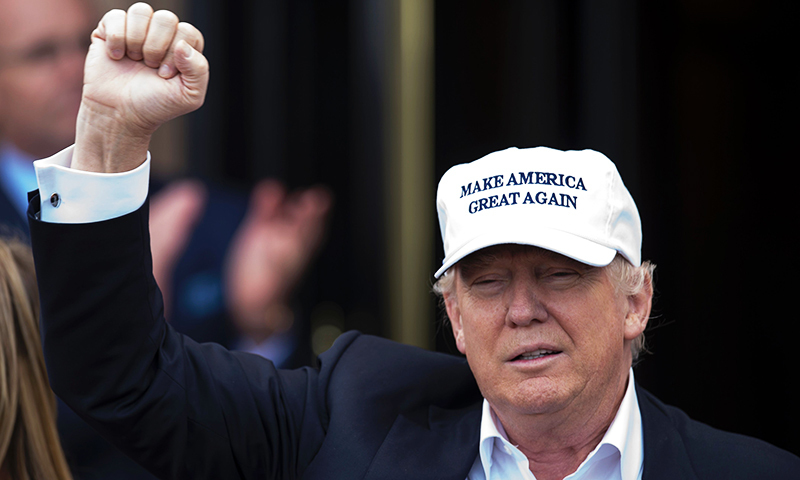 TURNBERRY: Donald Trump hailed Britain’s vote to leave the EU as â€œfantasticâ€ shortly after arriving in Scotland on Friday for his first international trip since becoming the presumptive Republican presidential nominee.

Ahead of his visit, Trump had told Fox News that he felt Britain should â€œgo it aloneâ€ and leave the 28-member EU in a move that could shape the continent.

Trump swooped down by helicopter into his Trump Turnberry golf course, where a large Scottish flag flew in front of the picturesque seafront, as protesters gathered nearby.

The visit is brief, long enough to cut the ribbon on a refurbishment of his golf course, returning to the US presidential campaign by Saturday.

The New York celebrity tycoon has caused alarm in Europe with his abrasive style and pledges to deport millions of undocumented immigrants and build a wall on the border with Mexico.

His proposal to ban Muslims from entering the United States drew the ire of Britain’s Prime Minister David Cameron, who called the idea â€œstupid, divisive and wrongâ€.

His main rival for the presidential vote in November, Hillary Clinton, seized the moment to post a video compilation of criticism from Cameron and others.

â€œPeople in Scotland are not thrilled about Trump coming to their country,â€ Clinton posted on Twitter. â€œWe know the feeling.â€

Two groups, Scotland Against Trump and Stand Up To Racism Scotland bussed protesters to the golf resort to picket the property mogul.

â€œScotland is a progressive, tolerant and multicultural country and we oppose the bigotry that Donald Trump represents,â€ Keir McKechnie of Stand Up To Racism Scotland told AFP.

â€œWe want to tell the world that he’s not welcome here.â€

Jonathon Shafi of Scotland Against Trump said he wanted the gathering to demonstrate unity with protesters in the US that have disrupted Trump rallies.

â€œWe want to send a message of solidarity to movements like Black Lives Matter that we are united in opposition,â€ Shafi told AFP.

On Saturday, Trump is expected to travel to the Trump International Golf Links, his course in the eastern coastal village of Balmedie, a resort that has been controversial with locals.

Some irate neighbours living next to the course have raised Mexican flags in symbolic opposition to Trump.

The trip is in a starkly different atmosphere than a visit to Germany by Barack Obama in 2008, when the US president was the presumptive Democratic nominee.

Obama addressed a crowd of tens of thousands about his hopes of closer links to a unified Europe.

Trump has criticised the continent’s leaders as â€œweakâ€, and accused them of inadequate measures to combat terrorism after attacks in Brussels this year.