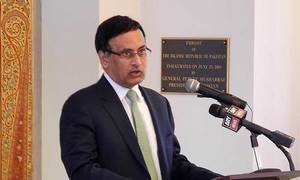 ISLAMABAD: The Pakistan People’s Party on Friday disowned former Pakistan ambassador to the US, Hussain Haqqani.

PPP spokesperson Farhatullah Babar, in a statement, said his party does not agree with Haqqani’s opinion or analysis and connecting his work with the PPP is wrong.

Reacting to the PPP spokesperson’s statement, Hussain Haqqani, in a series of tweets said he is glad and he can now focus on research and writing without having to worry about ties to the PPP or its policies.

“Political parties cannot be expected to own scholarly research or analysis just as scholarly work cannot be constrained by party policies,” said the former diplomat.

He, however, reminded PPP about his services to the party by saying that he joined the party’s slain leader Benazir Bhutto in 1993 and stood by her and her husband, Asif Ali Zardari in tough times.

“That political contribution to Pakistani politics is sufficient,” said Haqqani.