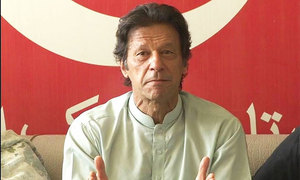 Imran Khan announced that his party has filed a reference with the Election Commission of Pakistan (ECP) seeking Prime Minister Nawaz Sharifâ€™s disqualification for not declaring his actual assets to the commission.

The petition was filed by the party leader Dr Yasmeen Rashid.

“Nawaz Sharif has been breaking Pakistan’s laws since his term began, but no one has taken action against them, we are trying to make him obey the law,” said Imran Khan while announcing the development.

The Pakistan Peoples Party (PPP) had earlier announced their decision to file petitions against the disqualification of PM and his family members in ECP.