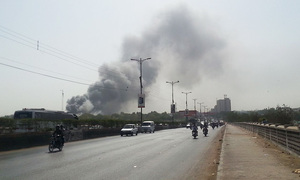 Firefighters were busy controlling the fire that broke out in a chemical factory in the cityâ€™s Site Area and in a tyre factory near Gulbai.

Fire officials declared it a third-degree fire. However, no loss of human life was reported.

According to DawnNews, firefighting department officials have asked for all fire brigades in the city to reach the Industrial Area immediately.

It was still unclear what the cause of the fire was, with officials stating that the reason can only be determined after an investigation into the matter is conducted.

Last night, a massive fire broke out in a pharmaceutical company near Hawkesbay and eight fire brigade vehicles were called in to control it.

Fire officials said short circuit caused the fire to erupt and that before it was extinguished, medicines worth millions of rupees were destroyed.