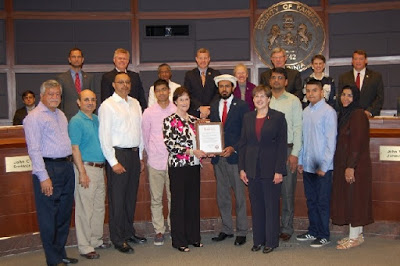 It was a great day for the Ahmadiyya Muslim Community as they were in for a real treat. Chairman Sharon Bulova and the Fairfax County Board of Supervisors recognized the Ahmadi Muslims with a Resolution for all their hard work on the True Islam campaign.

The True Islam campaign aims to educate Americans, be they Muslim or non Muslim, about the distinction between extremists and those who are true Muslims. The website www.trueislam.com shows 11 points, all accompanied by animated YouTube videos no more than two minutes long. It also shows those who have supported the campaign with signed endorsements, like from Chief Jarrod Burguan, who was serving as the San Bernardino Police Chief during the incident of the Muslim couple who carried out terrorist attacks in San Bernardino, California in late 2015.

Chairman Bulova, before calling Imam Rizwan Khan to say a few words and accept the plaque, commented with her own memorable account of visiting Mubarak Mosque when it was vandalized during its construction phase. She was impressed with the way the surrounding community came together and supported the Ahmadi Muslims of Northern Virginia in their time of need. Chairman Bulova is no stranger to Mubarak Mosque. She has been invited on more than one occasion by the women’s auxiliary of the Ahmadiyya Muslim Community and attended their interfaith events. It was not lost on the Board of the timing of how this Resolution coincided with recent events pertaining to extremist attacks resulting in a bad reputation for Muslims. It was acknowledged that this event had been scheduled quite some time in advance. Additional comments were provided by Supervisor Gross, who was only too happy to second the vote on granting this Resolution, as well as Supervisor Storck who extended a warm invitation to the Ahmadiyya Muslim Community to visit Mount Vernon, and Supervisor Kathy Smith who lived close by to the mosque and had even attended one of their events. Chairman Bulova called to vote on granting this Resolution to which everyone agreed, and invited the Ahmadiyya representative, Imam Rizwan Khan to say a few words. Imam Rizwan thanked the board for granting the Ahmadi Muslims this honor and explained a little bit about what the campaign, True Islam was intended for, after which Chairman Bulova proceeded to invite the whole group to take a photo of the group accepting the plaque.