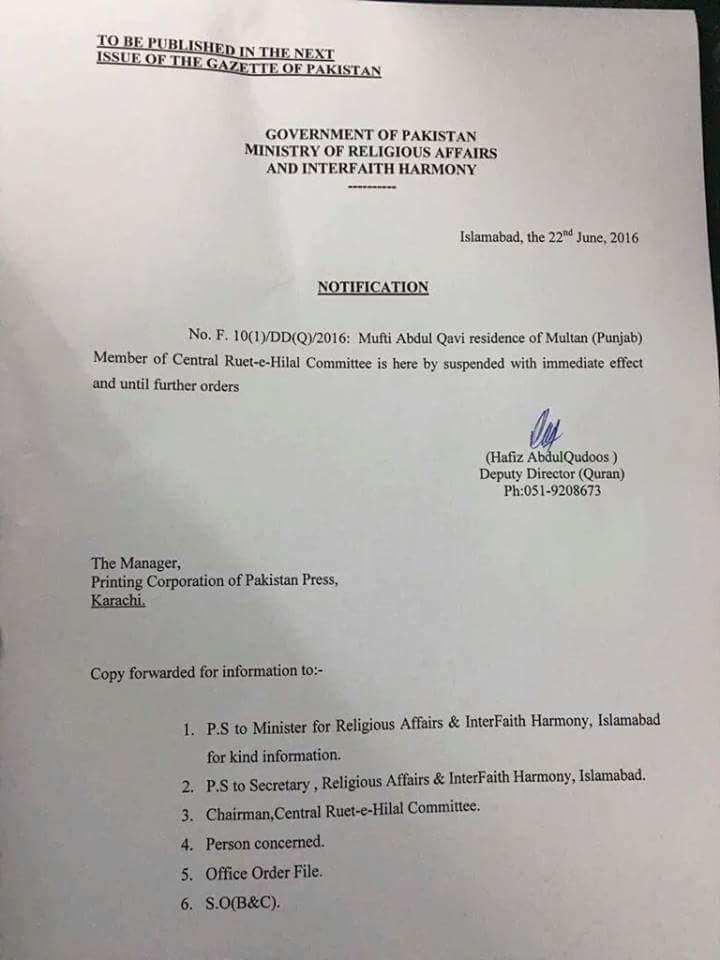 The minister, who said the photos were ‘controversial’, also suspended the muftiâ€™s membership in the National Ulema Mushaikh Council, a spokesman for the Ministry of Religious Affairs said.

The matter of Mufti Abdul Qavi’s photos has been referred to National Ulema Mushaikh Council for further procedure, the spokesperson added.

Ever since Qavi’s pictures with Baloch surfaced, social media was rife with speculation about his association with the Pakistan Tehreek-i-Insaf’s (PTI) ulema wing. However, PTI spokesman Naeemul Haque issued a denial on Tuesday.

Talking to DawnNews, Qavi said it was Baloch herself who had requested a meeting and came to meet him at a hotel. He also said he was unaware of his suspension from the two committees.

In a video of the meeting that Baloch uploaded on Facebook, Mufti Qavi can be seen saying that he will guide Baloch on spiritual and religious issues and that she had agreed to follow his instructions.

Baloch shot to fame in Pakistan in 2014 after a video of her pouting for the camera and asking “How em looking?” went viral.The Ruet-i-Hilal Committee is responsible for sighting the new moon to determines important dates for the Islamic lunar calendar.

The National Ulema Mushaikh Council consists of members from mainstream boards of religious seminaries belonging to Barelvi, Shia, Deobandi and Ahle Hadees schools of thought and madressahs affiliated with the Jamaat-i-Islami to evolve consensus among different sects from all provinces.