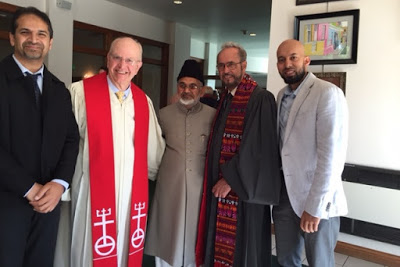 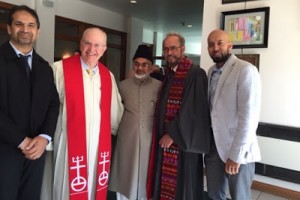 Ahmadiyya Muslim Jamat USA was given an invitation to visit the St. Charles Church USA and delegation visited to increase the peace relations between all the religious.

Imam Shamshad indicated that he was very thankful and honored that he was invited to the church today and congratulated Senior Pastor Pattee on his noble accomplishment.

We have to build our relationship with understanding and respect to each other.

Locally, we have built a great friendship with Senior Pastor, David Pattee from the United Church of Christ in St. Charles. Pastor Pattee and members from his congregation came to a Peace Symposium held at the Baet ul Jamaay Mosque of the Ahmadiyya Muslim Community in Glen Ellyn in April of 2016. Respected Imam Shamshad and Pastor Pattee built an instant warm connection upon meeting each other.

And to that end, Pastor Pattee invited members of the Ahmadiyya Muslim Community in Glen Ellyn to attend an event at his church 40w451 Fox Mill Blvd, St Charles IL 44240, on Sunday, June 12, 2016. Senior Pastor Pattee sent Imam Shamshad a warm e-mail thanking him for attending the church and speaking, warm regards for the book that was given as a gift, and being a brother in faith of God. He also extended an invitation for a small group from both congregations to meet in the near future. Imam Shamshad, Mr. Qaderi, Mr. Mashhood Mirza were the representatives from the Baet-ul Jaamay Mosque in Glen Ellyn. This was a special event as this was the installation of Mr. Pattee as the Senior Pastor at his esteemed church. He asked Imam Shamshad of the Ahmadiyya Muslim Community Â to begin and lead the procession for the event.

Imam Shamshad began by reciting Surah Al-Fatiha in Arabic, and then the first Ruku of Surah Kahf. He then provided the English translation of each chapter. Imam Shamshad condemned the vicious attack in Orlando in the strongest of terms. He articulated that True Islam stands for only peace and love. He used the Quâ€™ranic doctrine of â€œKilling of one innocent human being is as if one has killed all mankind.â€ He further indicated that he was very thankful and honored that he was invited to the church today and congratulated Senior Pastor Pattee on his noble accomplishment. Imam Shamshad then handed Senior Pastor Pattee a gift which was a book entitled “A Message of Peace,” written by the worldwide head of the Ahmadiyya Muslim Community, the beloved Hadhrat Mirza Masroor Ahmad, the 5th successor to Hadhrat Mirza Ghulam Ahmad, the Promised Messiah A.S. Some other notable speakers who partook in this event were Tom Palansky, the United Church of Christ President, Dennis Beiermann, the organist and director of music for the church, Kathy Brens a member of CUCC, and Reverend Jorge Morales, a conference minister for the United Church of Christ in Illinois.

Pastor Pattee articulated on why humanity must bind together, regardless of religious/political differences to make the world a better place. Imam Shamshad and the other speakers present echoed these sentiments as well. A somber morning turned into comfort and love with the installation of Senior Pastor Pattee, along with the invocation from Imam Shamshad. 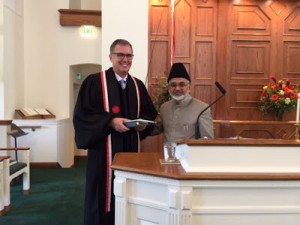 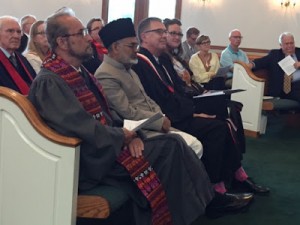