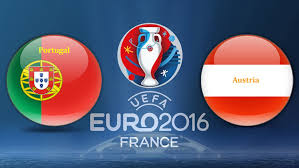 UEFA Euro cup 2016; three matches will be played today in the UEFA Euro cup. Portugal will take on Austria after a disappointed draw in the starting match of the Euro cup. In another match Belgium will take on Ireland and in the third match hungry will go against Iceland. Ice land is taking part in Euro Cup first time and they drew against Portugal. Irabwah will keep providing the live streaming of All the matches. Click irabwah.com to catch all the live action.