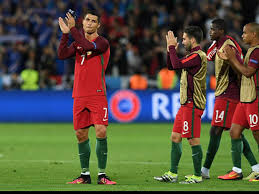 In the second match of group F Iceland made an upset entry in the first appearance in a major European tournament as they drew against a stronger Christiano Ronaldo Portugal.

Nani from Portugal scored the first goal in the 31th minute of the match and took his side in front. It looked that it will be an easy win for Portugal but Iceland had other things in their minds. In the 51st minute of the match Iceland equalized the score line with 1-1. After that Portugal tried their best to take lead but Iceland defended superbly and prevent Ronaldo and his side to score the goal.