Muhammad Ali was buried in the presence of thousands of people 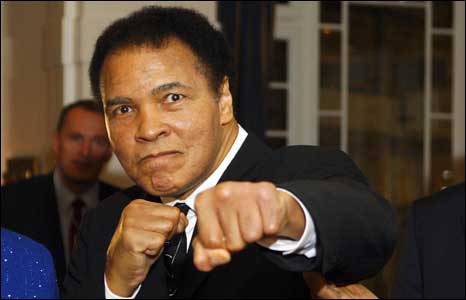 The biggest sportsman and three time world heavyweight champion Muhammad Ali was buried in the tens of thousands of fans.

Funeral of Muhammad Ali took place in the native city and boxer’s hometown of Louisville, Kentucky, where grievers prayed over the body of a man who fought in the ring and sought peace outside it.

About 14,000 people, from different field of lifes attended the funeral of one of the greatest from boxing field. His age was 74 at the time of his death and he remained three time world champion.

“The passing of Muhammad Ali has made us all feel a little more alone in the world,” said Sherman Jackson, a Muslim scholar at the University of Southern California.

“Something solid, something big, beautiful and life-affirming has left this world,” he added.

U.S. President Barack Obama also praised Ali on Thursday in a Facebook live broadcast from the White House, showing off a copy of the book, “GOAT: A Tribute to Muhammad Ali,” and a signed pair of boxing gloves gifted to him by Ali.

“It’s very rare where a figure captures the imagination of the entire world,” Obama said. “He was one of a kind and in my book he’ll always be the greatest.”