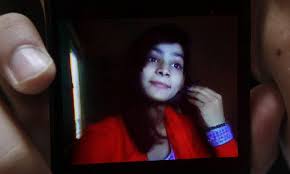 Rafique’s husband buried her after her own family rejected her body The young woman was buried on Thursday by her husband, 19-year-old Hassan Khan.

“When we saw her body, she had strangulation marks on her neck,” Rafique’s mother-in-law Shahida Bib said.

Rafique’s family had refused to accept her body. Khan, the young widower, told police that Rafique had feared for her life after the couple eloped.