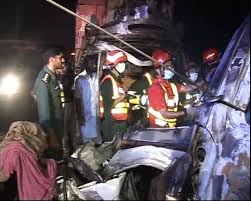 Chiniot; A car driver lost his life in a road accident with a Shahzoor Pickup truck as he was traveling from Sargodha to Chiniot. According to the details Arshad from 47 Adda was traveling towards Faisalabad with his family. As he reached near Chiniot, a mini truck collapsed to the car and caused the death of Arshad. Other family members remained save and truck driver ran away from the spot. Remember that dozens of people lose their lives every month on Sargodha Faisalabad road due to heavy traffic. The issue has also been raised in the national assemble and speaker national assembly has ordered to submit the report of accidents and causes. Government will decide then to build a one way road on the track.