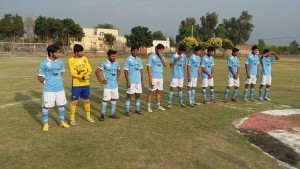 Ahmad FC continues to mount pressure ion Tahir Soccer club for the top position in the fazal E Umer Soccer League as they beat Masroor FC by the score line of 4-1. All four goals from Ahmad FC were scored by Kamran Tayyab. Ahmad FC have not only taken all three points but also a good goal average.