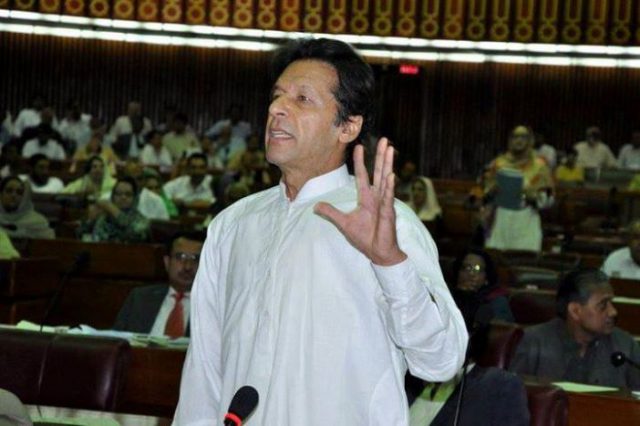 Islamabad: Pakistan Tehreek-i-Insaf chairman Imran Khan has delivered a speech on Panama gate rumor in National Assembly.In his passionate speech he categorically rejects the PM’s claim on London properties.
He further said whatever TOR’s selected in near future I am here for my accountability, start the accountability from me alongside Prime Minister Nawaz Sharif.
The government, of late, had stepped up attacks on the PTI leader over his alleged perversion of charity funds meant for the hospital. In reply to this In his 50 Min Speech on Panama issue, Mr. Khan also requested the Speaker to make “SKMCH” Shaukat Khanam Memorial Hospital a part of the investigation to clear its name once for all.
Imran Khan Pointing towards the Opposition front rows said that â€œEvery time I raise the issue of corruption, the PML-N starts criticizing SKMCH, the only cancer hospital in the country. For Godâ€™s sake, donâ€™t forget that cancer has become the leading killer disease in the country; every seventh person here could have cancer,â€
Imran Khan also told the Assembly about his offshore Company in England stated that “I have played professional cricket during 1970’s and 80’s I have purchased a flat in London from that income in 1983”.

â€œSince I wasnâ€™t a British citizen when I was about to buy the flat in my name, my accountant told me that I would have to pay inheritance tax and capital gains tax on it. He advised that I buy this through an offshore company since it was legal. But I have never defended ownership of this flat … which I sold in 2003 and brought its proceeds back home through legal banking channels.â€