Investigation through Judicial Commission may be delayed: Imran Khan 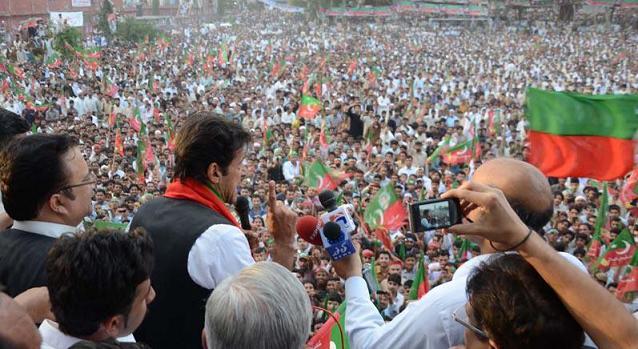 BANNU: Chairman Pakistan Tehreek-e-Insaf (PTI) Imran Khan said that decision of the probe against the persons mentioned in Panama Papers may be delayed due to a lengthy process of the Judicial Commission.

He was addressing a mammoth public gathering here at the Jinnah Sports Complex on Wednesday.

The rally, organized by the PTI, was a part of Imranâ€™s campaign against prime minister Mian Mohammad Nawaz Sharif in connection with Panama Leaks.

Imran said in his speech that the prime minister was not willing to collect taxes from the rich class.

â€œWe need to step up against the king of corruption. Mian Sahab, speak the truth. Tell us how many assets you own and where are they,â€ the PTI chief said, adding that Nawaz Sharif will have to answer people on Panama Papersâ€™ revelations.

â€œNAB can investigate the case within weeks as investigation through commission may be delayed.â€