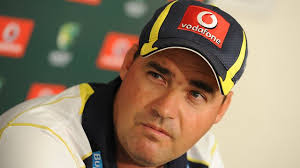 Pakistan’s newly selected cricket coach Mickey Arthur put his upcoming responsibilities on notice Monday, cautioning he would not compromise on discipline, fitness, and fielding ahead of tough tours in England and Australia.

â€œI will be tough on discipline and that’s the way we can get better and better results,â€ says the 47-year-old. â€”

â€œI will be tough on discipline and that’s the way we can get better and better results,â€ the 47-year-old said.

â€œI want everybody to start playing for the team and I don’t want any selfish players around,â€ he said, calling for â€œproper values and boundariesâ€.

opener Ahmed Shehzad and middle-order batsman Umar Akmal were both left out of the squad’s boot camp training session ahead of July’s tour of England due to disciplinary issues.

â€œOur bowling is good, but we need to lift our batting massively,â€ he said.

â€œI will also be tough on fielding and fitness and need players who can play long-term, and these issues are non-negotiable.â€

But he also said he required boldness in his players. â€œI also want players who aren’t prepared to be bullied,â€ he said.

â€œFor Pakistan players, those conditions are trying, but I want the team to be up for the challenge.

â€œWithout a doubt, we will go to win… If the players show improvement, then I know I am doing my job.â€

â€œArthur said the â€œsheer challengeâ€ of the Pakistan coaching role â€” regarded as one of the toughest and most turbulent in international cricket â€” â€œreally excited meâ€.

â€œI know everything about the job, but what I know more is that there is the huge passion (for) cricket and there is enormous talent in Pakistan and I think if we can get a proper structure in place then we can really get this team far away,â€ he said.