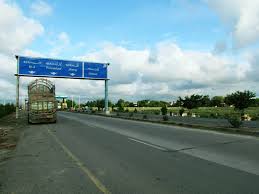 Rabwah; A high-speed dumper truck killed a man and injured other quite badly on Rabwah Adda on Sargodha road. According to the news, Abbas and Shezad from Chak 37 were going Faisalabad on Bike. As they reached near Rabwah Adda they tried to overtake a speedy dumper truck. Meanwhile, the bike collapsed and the truck hit the bike and both crushed under the tires of the heavy truck. Abbas was dead on the spot whereas Shezad was badly injured and took to the hospital. Â The driver of the truck ran away from the spot.