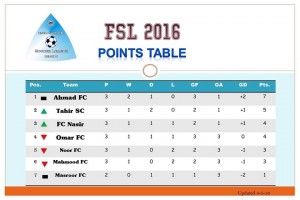 After ten matches have been played in the second season of Fazal E Umar Soccer League and all the teams have almost played their three matches except Masrror FC. The tam Of Ahmad FC is standing at the top of points table with 7 points whereas Tahir Soccer Club is behind on second position with 5 points. FC Nasir and Umer FC are on third and fourth position on the table Â with four points each. Masroor FC is in the bottom of the table with a match to play.