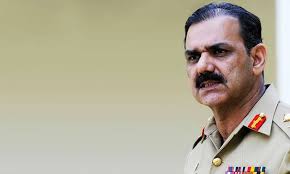 “These officers were dismissed, punished and sent home in a single related case,” Bajwa said during an interview, in a first official comment on the move.

Bajwa added that the action was taken after months of investigation.

Answering a question about the army’s silence and the absence of an official version after the sackings, Bajwa maintained “such actions within the army are not made public anywhere in the world”.

“This news was not made public but was leaked days after the action was taken.”

“I did not deny the news at that time but as I told you, it is not the institutional policy to do so. A press release was issued in the National Logistics Cell (NLC) scam case because NLC was a public institution,” Bajwa told the show host.

“There is no inquiry against the two and everything circulating except what I have confirmed is a rumour,” said the army officer.

Answering queries about military courts, he told the show host that the 11 death sentences announced a day earlier have taken the total number of decided cases to 88 and expressed hope that all pending cases will be decided by January 2017, the end limit of military courts.

“A total of 11 military courts are working across the country day in and day out but no decision is being taken without following due process or in haste,” claimed Bajwa.