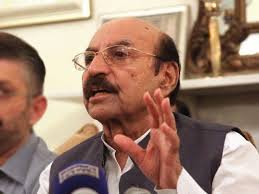 CM of Sindh Sayyad Qaim Ali Shah has strongly criticized the CM of Punjab Shahbaz Sharif for spending all the resources and focus on the roads and constructional projects despite spending more money on health and education. He pointed towards the billions of rupees which were spent on Metro and orange train and hospitals and schools are in worst condition.

Speaking at a dinner hosted for him by the Red Crescent Society (RCS) at Gymkhana Club here late on Monday evening, Mr. Shah said he fully realised the importance of a perfect transport system but nothing was more important than life health and livelihood.

â€œHow can people enjoy easy and comfortable journey when they or their family members are starving or unwell?â€ he argued and said that the Sindh government accorded suitable priorities to the education and health sectors.

The chief minister was critical of the federal government over the fate of the Pakistan Steel Mill, saying that one of the most valuable gifts to the people of Sindh from PPP founder chairman Zulfikar Ali Bhutto was now in shambles. â€œWorkers of the mill have not been getting their salaries for months while its machinery was being taken away or left to rot,â€ he observed.

CM Shaw also reacted towards the Panama leaks and the decision of the judicial commission. â€œThe judiciary can give its verdict based on the findings of the commission whatever the terms of the reference state,â€ he said.

â€œWhat we want is justice, the supremacy of Constitution and law, stability and solidarity of the country. Democracy should not be derailed or crippled at any cost,â€ said Mr. Shah.