No protest will be allowed in D Chowk says Interior minister 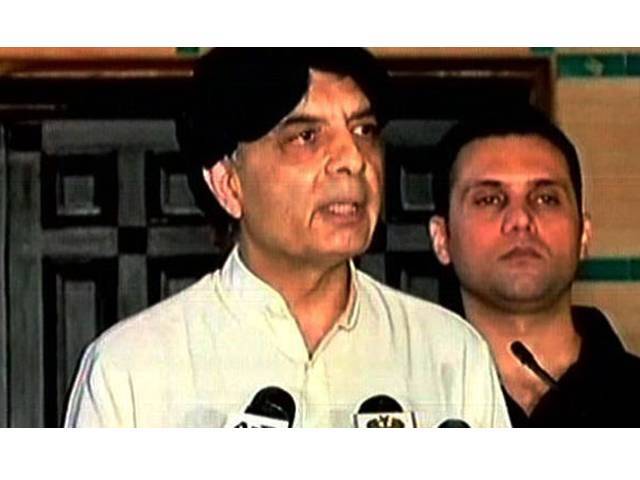 Interior minister Chaudhry Nisar has said that there will be no protest or political meeting will be allowed at D chowk Islamabad.

According to the details Interior Minister Chaudhry Nisar Ali khan has declared clearly that there will be no political activity allowed in the red zone and D chowk of Islamabad on Monday. He said the government has â€œput its foot downâ€ on the holding of another chehlum for Mumtaz Qadri, the murderer of former Punjab governor Salman Taseer, adding that the government will not permit any group or party to hold political meetings in the capitalâ€™s Red Zone or the F-9 park.

â€œWhy Islamabad? The whole of Pakistan is available for political gatherings or jalsas,â€ questioned the interior minister.

He said the government will come out with a proposal to define areas in Islamabad where jalsas can be held.

â€œWe will put up the proposal for discussion in Parliament,â€ Nisar said, adding that paralysing the federal capital had cost the country’s treasury billions of rupees in 2014, referring to the four-month protest sit-in staged by the Pakistan Tehreek-i-Insaf.

â€œBusinesses remained closed for months, the Chinese presidentâ€™s visit was delayed and the government spent over a billion rupees on security measures taken during the time,â€ the minister said.

Nisar went on to say that if the government allows holding of gatherings at a particular place in Islamabad, â€œI will need guarantees that the jalsa will not move from that area.â€

â€œIf they try to move from the jalsa area and action is taken by law enforcers to contain them and people die as a result, we will not be responsible for those casualties.

The April 24 PTI jalsa should follow these rules and I am ready to talk to Imran Khan about these issues to chalk out a plan.â€