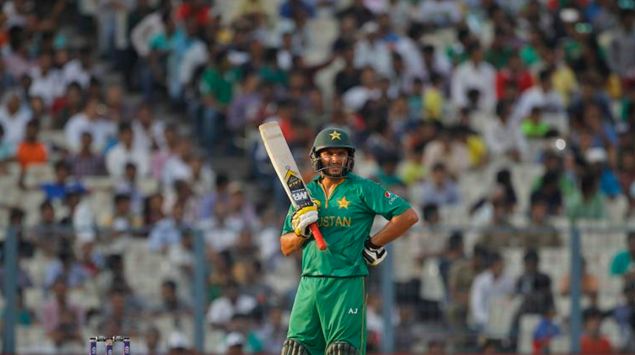 Ahead of the match against arch-rivals India, Pakistan stood up for the big occasion and defeated Bangladesh convincingly by 55 runs.Bangladesh did not resist against Pakistan all round performance.

After winning the toss Afridi decided to bat on Kolkata flat wicket and rest was just incredible.A big worry for Pakistan was their “openers but they stood firm on the big occasion and Pakistan was all over Bangladesh in first 6 over despite losing Sharjeel early Pakistan did not panic and Hafeez-Shahzad made 95 runs partnership after well made 52 Shahzad got out and it’s time for BOOM BOOM to rise, coming up the order Afridi smashed Bangladeshi bowlers all over the park and made 19 ball 49.Pakistan ended with 201 on the board.

Bangladesh start was not that they would want.Amir struck in his very first over with the wicket of Sarkar.Tamim and Shabbir showed some character but it was Afridi once again but with the ball, this time, he struck in his very first over.Pakistan bowlers were chipping with wickets in regular intervals and they did not allow Bangladesh to Dictate what so ever.Shakib al Hasan made his 50 but it came too late and Bangladesh ended with 146/6 in 20 overs.
Shahid Afridi was man of the match for his al round performance.