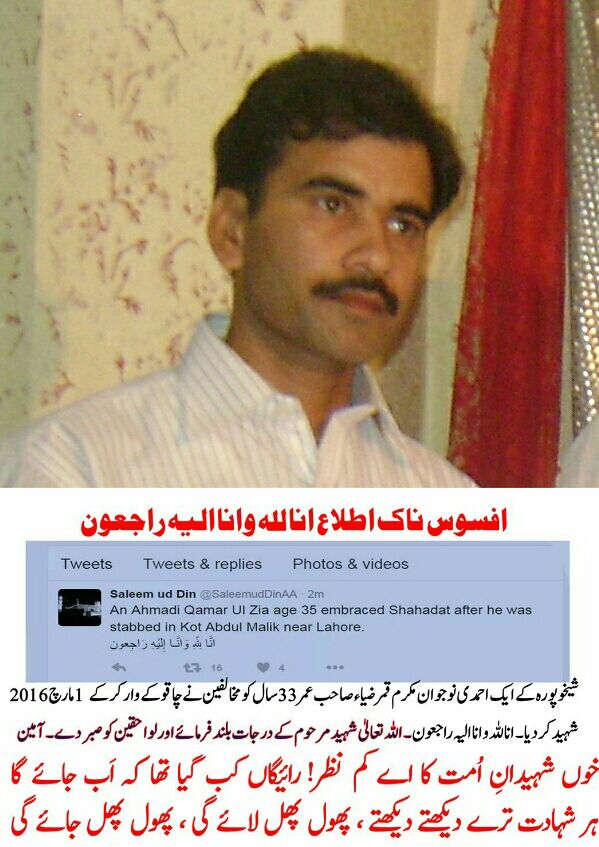 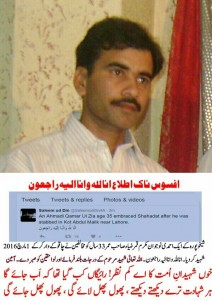 Lahore; Another Ahmadi in Lahore has been Martyred by the religious extremists in Kot Abdul Malik Lahore. According to the details religious discrimination against the Ahmadi Muslims in all over Pakistan is continue as an Ahmadi young man was killed by the religious terrorists in front of his house. Two man armed with knives attacked him as he came back home after picking his children from school. Mr. Zia has been receiving threats from the extremists and he also submitted applications in the police station previously but police did not take any action. He was also physically tortured a few years ago but no one took action. He has left three children and wife behind including two young daughters one and two years old and one son eight year old. He was 35 year old and he was running a mobile shop near his house. Spokesman of Jamat E Ahmadia has condemned the incidence and has asked government to stop the killing , discrimination and hate speech against Ahmadis in Pakistan.Â Â  Mazhhar Ali, brother of the late Qamar Zia, says that the attackers were from the same locality and one of them has already fled the area.

Ziaâ€™s family said he had been receiving threatening calls from unknown numbers since long.

â€œZia was killed by repeated strokes of knives,â€Â Javed Ahmed, a police official dealing with the investigation, said.