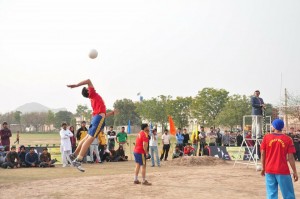 Dar Ul Rehmat has win All Rabwah volleyball tournament from team factory Area. According to the details Majlis Khudam Ul Ahmadiyya Maqami organized All Rabwah volleyball tournament. The Final of the competition was played between the team of Dar Ul Rehmat and factory Area. Remember that these are the two most skilled teams of Rabwah and both sides contains very professional and experts players. Both teams often reach in the finals of the tournament and have a long rivalry but this time Dar ul Rehmat managed to win the contest. First two sets won by the Team Factory Area but team Dar Ul Rehmat made a remarkable comeback and won the remaining three sets to become the champions of Rabwah.